Under the fame, there are many alarms! What happened to this country when tens of thousands of companies were disbanded?

Many economies around the world are at risk of slowing growth, but some, like Vietnam, stand out.

In a report this month, the ASEAN +3 Macroeconomic Research Office raised its growth forecast for Vietnam to 7%, up from the government's earlier estimate of 6-6.5%. This is in line with the IMF's previous forecast, while Standard Chartered Bank expects Vietnam's GDP to grow 7.5 percent in 2022.

Vietnam's actual numbers also seem to be responding to the outside world's favor, with the country earlier reporting excellent third-quarter GDP growth of 13.67% year on year.

The data seem to paint a picture of a thriving Vietnam, in stark contrast to the global malaise.

But is Vietnam's economy really that good? 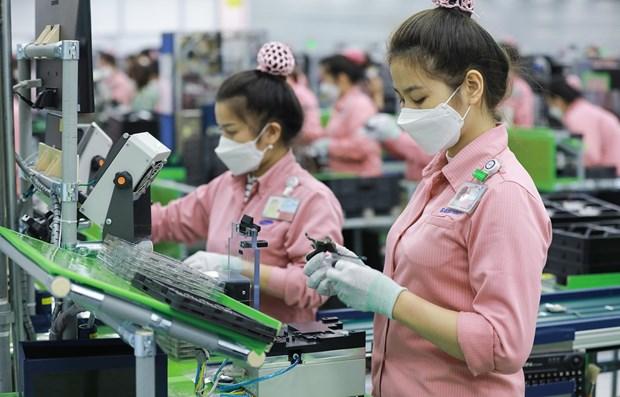 Truth under the data

Much of Vietnam's economy is based on reprocessing, importing raw materials or primary manufactured goods from other countries and exporting them to Europe and the United States through local rough processing, earning a hard fee.

That model has been battered during the pandemic, which has underwhelmed Vietnam's economic data over the past two years, especially since GDP fell more than 6 percent in the third quarter of last year. The high GDP growth rate of 13.67% in the third quarter of this year was on top of the negative growth in the same period last year. In other words, the boom figure was actually watered down.

In terms of industrial production, Vietnam's output of some key industrial products rebounded in the first 10 months of this year, such as a 16.5% increase in mobile phone components, but on a deeper level, mobile phone production actually fell by 5.1%. In Vietnam, which has been a major focus for handset makers in recent years, the contrast is ominous.

Overall industrial data suggest that Vietnam's growth momentum has also begun to wane recently. With the exception of January 2022, Vietnam's industrial production growth rate had been above 9 percent this year, but it fell below 9 percent in October and went straight down to 6.3 percent.

The recent slowdown in Vietnam's manufacturing sector is linked to exports. In October, Vietnam's exports stood at $30.27 billion, up from the previous month but down 13.3 percent from August.

Nguyen Thanh Can, chairman of luggage maker Virtue King Vietnam, told media that overseas orders were down 20 to 30 percent year-on-year despite the approaching Christmas, with Europe and the United States seeing the biggest drop, while regions such as Canada, Japan and South Korea also reduced purchases.

For his part, Prime Minister Pham Minh Thien says Vietnam needs to increase exports by diversifying markets and products, and that the government and domestic companies need to work with foreign investment companies to boost exports.

But it is a cold winter abroad.

The strong dollar is one of Vietnam's manufacturing woes.

Analysts further explained that the euro's decline against the dollar has also affected the sentiment of European buyers, reducing overseas trade and hurting Vietnam's manufacturing sector.

For Vietnamese companies that rely on imports, the strong dollar is also adding to the burden.

The bubble tea industry says it imports 90 percent of its ingredients from South Korea and Taiwan and needs to restock almost every month, typically in the U.S. dollar. He complains that the dollar's rise has raised his costs by about 10%, and he can't raise prices because it would drive away customers.

A companion problem is rising fuel prices. Although the Vietnamese government has repeatedly stressed that energy is abundant, the frequent news of fuel running out in October is undermining the credibility of that argument.

In late October, several gas stations in the Mekong Delta reported running out of gas, and people in the region had to travel 10 kilometers to find one that had gas. Gas station owners added that they were not sure when supplies would resume.

The energy crisis is also threatening production, and the main fuel for electricity, coal, is in short supply because of sporadic outbreaks. Power outages are not even a special issue this year. In recent years, Vietnam has been suffering from power shortages due to the rapid growth of manufacturing and the backward energy structure. Even this will be a major factor limiting Vietnam's manufacturing in the coming years.

Despite its reputation, Vietnam's economy is full of alarms.

The data show that large numbers of Vietnamese companies are leaving the country. Despite the rapid economic growth in the first nine months of the year, 13,820 local companies announced their dissolution.