Surging demand and tight shipping capacity at the beginning of the year made the international maritime market "hard to find a container", but as the year winds down, the trend of "turning the tide" seems irreversible.

According to the World Container Composite Index released by international shipping data agency Delury on November 24, the freight rate index, which has fallen for 39 consecutive weeks, fell 7% in the latest installment to $2,404.46 per 40-foot container, 74% lower than the same period last year and 77% lower than the peak of more than $10,000 in September 2021. The Shanghai Shipping Exchange on Nov. 25 released China's export container freight index to 1,563.46 points, a weekly decline of 5.3%, continuing the previous downward trend. 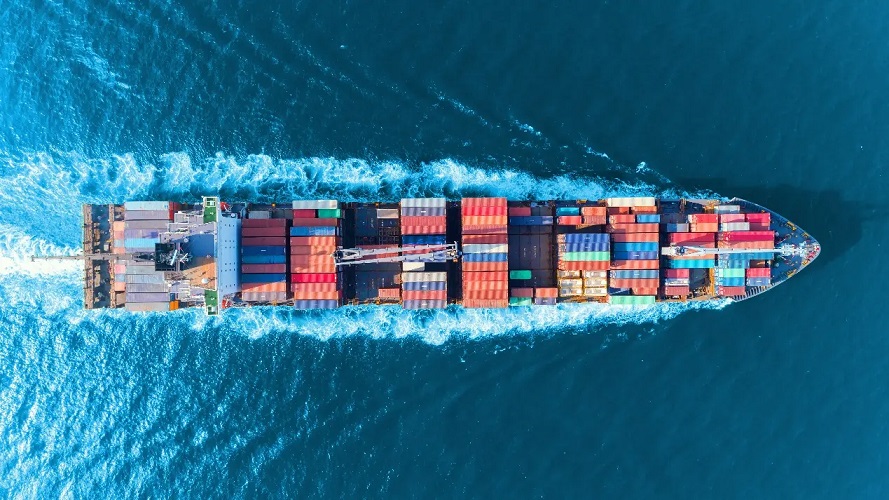 According to the latest data released this month by the Kiel Institute for the World Economy, global trade volumes edged down 0.8 per cent month-on-month, while shipping rates from China to northern Europe have fallen by about two-thirds since the start of the year to their lowest level in nearly two years. In addition, global container ship congestion has eased, but 10 per cent of all goods transported globally are still congested.

According to a report on global capacity supply from Sea-Intelligence, a shipping data analysis company, there is a significant excess of global shipping capacity. On average, the number of full loads per container per quarter was 1.3 in 2010-2014, decreased to 1.18 in 2018-2019, and continued to decline in 2020-2022, reaching only 0.95 in the fourth quarter of 2021. The report also shows that in 2021, the global container volume is about 50 million TEUs, 17 percent of which is in surplus and vacant state. If combined with the 4.5 million to 4.8 million TEUs to be delivered in 2022, the maritime market will be in surplus of 13 million TEUs in 2023.

Kang Shuchun, chairman of China International Shipping Network Corporation, told the Global Times on Thursday that shipping costs have been on the decline this year due to downward pressure on the global economy, weak overall demand and geopolitical conflicts, and are expected to remain low next year.

A temporary squeeze on global shipping capacity due to port congestion or temporary closures, labor shortages and rising bunker fuel prices will temporarily push up freight rates, but it doesn't represent a trend correction, Mr. Kang said. In addition, shipping companies will release a new batch of ships and containers into the market in the past two years, which will aggravate the already excess shipping capacity in the market, which may lead to the continuous decline of sea freight in the next five years.

Pressure on shipping and foreign trade companies has increased

"Shipping containers is almost as cheap as it was before the pandemic." Overcapacity in the shipping industry after bottlenecks in recent months is bad news for shipowners, and the container shipping industry is completely unprepared for falling prices, German daily Handelsblatt reported Tuesday. In a June survey by Pricewaterhousecoopers, the international accounting firm, 63 percent of German shipping companies said at the time that they expected rates to remain stable or even higher. Since then, shipyards have seen a boom in orders. But now the glut has hit the entire shipping and shipbuilding industry.

An employee of a domestic shipping company told the Global Times on Tuesday that the international shipping chain is complicated and the volume of shipping has dropped, which has affected the whole chain. Among them, shipping enterprises bear the brunt. He argues that the collapse in freight rates, even below costs, will eat into shipping companies' profits. And the order reduction of foreign trade enterprises will also affect the business situation of enterprises. The whole international shipping industry also shows a big cycle of operation. "Some of the more mature domestic companies, including shipping companies and foreign trade companies, foresaw the cyclical nature of the industry at its peak last year and have become more conservative in their business," the official said.

Some companies have taken a pro-cyclical approach and expanded their businesses, and in the current situation they may suffer." A person in charge of a foreign trade enterprise in Yiwu, Zhejiang province, said that under the condition of decreasing orders, it can only take a shrinking strategy to reduce labor costs and inventory scale, and put the operation target on profit rather than revenue scale.

It will not improve in the short term

Analysts blame the Russia-Ukraine conflict, soaring energy costs, general inflation and, above all, changes in consumer spending as the main reasons for the drop in consumer demand. The latest figures show a year-on-year decline in US container imports. Us container imports fell 13 per cent year-on-year in October compared with September 2022, according to October data released by Descartes Datamyne, a data analytics group. Among the top 10 U.S. ports, New York/New Jersey, Long Beach and Los Angeles experienced big declines.

In the wake of the global coronavirus outbreak, US consumers are filling their homes by buying swimming pools, kitchen equipment or hardware. The shopping spree has sparked a rush to import Asian goods, prompting shipping lines to move some of their fleets to Pacific routes. The move exacerbated capacity bottlenecks on Asia-Europe shipping routes, and with it, prices rose sharply.

In the past, shipping rates have risen, the cost of industrial goods from Asia has soared, and delivery times have been long and uncertain. High demand for container freight has crippled many industries in Europe. But now more money is being spent on travel than on consumer goods. The trend of warehouse overflow in importing countries is becoming more and more serious, which has a negative impact on the international trade chain, and finally reflected in the maritime container traffic.

Zhong Zhechao, founder and CEO of One Shipping company, told the Global Times on Tuesday that the shift from "hard to find" to "empty" reflects a complete reversal of supply and demand in the global shipping market.

"The current slowdown in the international shipping market is due to a number of factors, but the underlying cause is weak consumer demand due to the global economic downturn." Zhong Zhechao believes that at present, Europe and the United States have been Mired in a few decades of high inflation, prices are soaring, people's purchasing power is reduced, resulting in sluggish demand; In addition, the risk of a global recession is compounded by a complex mix of factors. Global demand is shrinking further amid gloomy forecasts for the future economy. In turn, global trade has fallen.

Regarding the development trend of international shipping, Chung said, "The industry does not see an opportunity for international shipping to recover from the downturn, and we expect the current downturn to continue until at least the first half of next year. It will take time to see if there is a turnaround in the second half of next year." According to Zhong, the future performance of international shipping will be determined by a number of complex factors, starting with the recovery of the foreign trade sector, which in turn will be determined by the performance of the global economy.

Zhong Zhechao said the industry's recovery ultimately depends on the recovery of the global economy. This will test the strategic focus of enterprises and the ability to resist external risks.